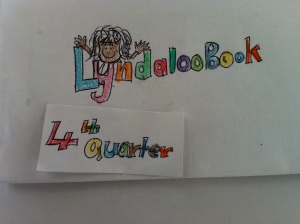 I’m closing the circle on this four-part series although the journey isn’t quite complete. I must just say I forgot many things or just couldn’t get online to update FB. For instance I killed a mouse but don’t know how – it lay dying on the floor of my room. I screamed and woke the household. The Hetty Daffodil Mysteries were opened and closed in the blink of an eye when in the lastest episode entitled “A Witness to Murder” a week-old chick died. While I sat struggling with WordPress the tiny chick struggled with its brief life – it died at the wings of its mother – squashed! Of all the things I’d find in Nicaragua, I never expected to come across a Munchausen hen. She’s killed around six of her chicks! Mofi the puppy who’s just a few months old was incensed and nearly killed the hen while she ran around wheeping! She’s back free range with the rest of the flock.

July 2012
1st:  DO NOT DISTURB: The artist is working. My children’s activity booklet 🙂 fnwl♥ 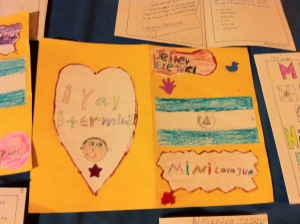 The completed front and back covers by Jeiner Brizuela, 11

5th: It’s very important when writing one’s first book to have the beady eye of your 8-year-old editor nearby. Today, I got the children to make their own book covers which they loved. Then they opened the book and went straight to the back pages which have the word searches!!
Book two, which is actually a short story, is at the printers – this time an 18 year old editor. The book launch is either Monday or Tuesday. lol!
LyndalooConsultingServices: One of the teachers wants to use my ideas for teaching the children to read in her class.  fnwl♥

11th:  So, the first book – Mi Nicaragua – was a success. I could not get the attention of the children because they were busy concentrating on colouring-in and doing the word searches. In fact, it was such a success the brother of one of my students wanted a copy so I asked his 3rd grade teacher if it was any use to them and she quite literally snapped my hand off. There is a second print-run of 50 on the way. 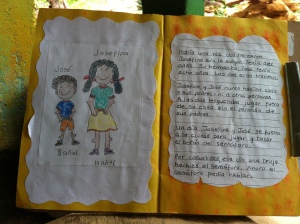 Meanwhile, book two has been a super-success. “José, Josefina y el semáforo hechizado” has had a print-run of 10. I’ve illustrated one copy and the children are busy illustrating their own copies. Alejandro, 9, who doesn’t do hugs, hugged me today when I left. Remember, I mentioned that it dawned on him that I’ll be leaving soon?

In other news, tick-tock, tick-tock. Peek-a-boo minus 16 days. fnwl♥

12th July: So, it’s green for go for the traffic light story. A request to use it in next week’s summer school! Roald Dahl eat your heart out. And yes, I’m very pleased with my illustrations.

Last day at school for a while. Alejandro got his prize for good attendance – a rucksack and it was lollipops all round for bingo!

13th: The cat, Princesa, and the puppy, Mofi, have just had a boxing match! By the time I got my camera out they’d finished. The cat throws a mean punch and ducks and dives too! Lol! fnwl ♥

Hurricane Lyndaloo: The Olympic games has been a very important part of my life for many years and I can rattle off many a statistic about key events in different games, so I could not let London2012 pass me by. 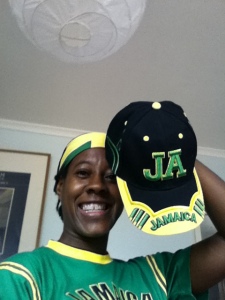 3rd: Starting to suffer from Olympics-acrophobia: athletics starting and don’t want to miss anything. Sadly, mad dash to Leeds to see a dying man. Taking him a Jamaican flag so we can cheer on our boys and girls 😉 he won’t get back to Jamaica so I’ve bought dominoes and am wearing my Jamaica headscarf!

Sadly, Israel was too weak to wave his flag. He was in too much pain and had no interest in watching his beloved Jamaican team do the nation proud.

Later that day, 4th: Exhausted, having run 4 rounds of 100m from the sofa! 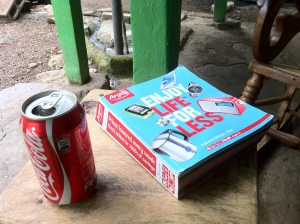 Now, what is this doing in Nicargua?

15th: Far be it for me to corrupt a nation but someone – not me – packed an Argos catalogue to take back to Nicaragua! lol!

September 2012
2nd: There’s a mouse playing hide-and-seek in the vegetable patch. I tried to wake the cat but she wasn’t having any of it. When she awakes we will re-assess her responsibilities. She was pretty useless yesterday, too, when the mouse ran through the kitchen! She did kill an iguana the other day which is not on the ‘kill-list’ poor thing.

5th: No, I didn’t feel the earthquake but others did. Parents took their children out of school and the government suspended school for the day. That leaves me with just 6 classes to teach my children. 😦 Who knows if there’ll be school tomorrow – any excuse to suspend classes. After the last national celebration there was a day’s holiday so the people could recover – can you believe it????????????

In other news, RIP Israel Bryan ♥

10th: Watched thousands of children – including some from my school – parade through the city today. I had to hold back tears. *gulp*

13th: I’m back from the printers with another 50 book print-run of Mi Nicaragua and a run of 50 copies of my latest book – a children’s activity book. I deny that the earthquake in nearby Guatemala had anything to do with my self-congratulatory back-patting-winding activity.
Just 16 days go go. Eeek. fnwl ♥

20th: ¡Ya, terminé! That’s what the children say when they’ve come to the end of their task. Today, that’s what I said. I taught my last class at La Nueva Esperanza. My year is almost up. Everyone wanted a copy of my book – which I forgot to sign!!

The children made thank you letters and farewell letters: I was overwhelmed and blubbed like a baby every five minutes.

My crew: Alejandro, 9, Jose Miguel, 9, Jose Luis, 8, Sintia, 11, Ashly, 8, Jeiner, 11, and Teresa, 10, were sent off with handmade gift boxes (hand-made by me) filled with goodies thanks to Amber, Hetty and Magda. They were extremely grateful. 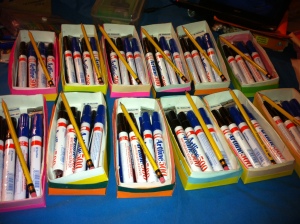 I hand-made gift boxes for all 12 teachers

The teachers were given whiteboard markers, pens, pencil etc and $10 not a great deal to you and me but when I finally get around to finishing my charity blog you’ll see just how far a little donation – which would probably provide a three-zone travel card for just over two months – went with several hundred children and 12 teachers. *sniffs* fnwl♥

Remember it ain’t over until the fat lady sings! I’m clinging on.

"Who am I? Why am I here? You're asking, I'm asking. Tired of all the moaning around me, tired of waiting for something to happen, I decided that I couldn't just let life pass me by. It occurred to me that if I could help a single person, that act could change the outcome of an entire community for the better. I want to matter. I want to make a difference. I've chosen Nicaragua." That was 2011 - this is 2021. I'm researching for a Doctorate of Education Creative and Media aka an Ed D. Those early questions are still as important in 2021 as they were in 2011. The Chicassos of 2017 now come with the BlackademicUK tag.
View all posts by Lynda →
This entry was posted in Creative writing, Nicaragua, Spanish, Travel and tagged Argos, creative writing, Facebook, Jamaica, London2012, Nicaragua, Olympics, Roald Dahl. Bookmark the permalink.