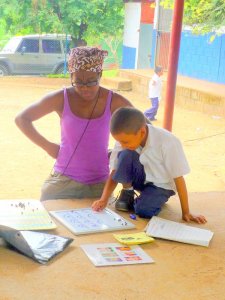 Miguel and me, October 2011. Sadly, after Christmas I didn’t see him in school

Making a difference
Over the last twelve months, perhaps even longer, I’ve been thinking about the best way to make a difference. In 2000 I began “give-as-you-earn” (GAYE) which meant that two charities and a sponsored child benefited from gift aid plus a  charitable contribution from me. It also meant the money I contributed was gone from my salary before I could feel it.

How to make a difference
A number of things happened that made me question where my money might be going. A friend told the story of her father’s sponsored child and how the charity was a bit cagey when they tried to visit the child. During a yoga holiday a group of us debated the amount that goes into administration in the big charities and how little goes to the cause. Another friend told of working in Eastern Europe and watching how the well-known charities travelled around in fancy trucks and the staff lived in expensive accommodation while she lived simply and went about on foot meeting the people and making a proper difference. I was further alarmed at the pictures in Haiti, one year after the devastation – they showed no evidence that the record-breaking millions donated by Britons was anywhere to be seen. Then just over a year ago I was looking at the correspondence from the charity that manages the care of my sponsored child and I noticed that Majaise, then 17, had changed radically. Then when I looked closer I realised she’d moved countries and had a face-lift – or rather the charity had given me a new sponsored child. It appears Majaise and her family had left the village in South Africa, so the charity decided to send me a child in Niger. It wasn’t even the same country! The whole point of me sponsoring the child was to ensure that she and her family could stay within the village and I had hoped that – like her school reports had suggested – she would one day become a doctor, a nurse, a teacher, someone of great value giving back to her community. I was extremely disappointed. My contributions had not made a difference for Majaise. I suspended my contributions to all my charities as it coincided with my career break to Nicaragua and you can’t GAYE if you’re not earning!

Time is money
Should you give money or should you give your time, or is it the same thing? I took a year out of work, forfeiting thousands of pounds and ploughed my energy into helping La Esperanza Granada. I helped children with dictation, mathematics, science, social studies, cultural studies… I helped in every way I could. I kept telling the children to come to school, to study. I hoped to inspire them.

Giving Back
A wise woman once told me: “Never give to receive.” That wise woman is Mrs S – the kindest person I know. She went further and said: “What you give to one person not only won’t come back from that person but it’ll be returned in a different way and by somebody else.” In effect what she was saying was give freely and without expectations.

And so, once upon a time somebody gave me something very precious – a chance. It changed my life. Michael Bailey, my sociology teacher, persuaded and encouraged me to go to university– I never looked back. Up until that point teachers had been very keen to tell me not only what I wasn’t capable of but also that I wasn’t capable, fullstop.When I came to Nicaragua I remembered what a difference Mr Bailey’s belief in me had made to my life. I wanted to do the same here. I’ve said it before – if you can change the fortunes of a single person for the better you can change an entire community. 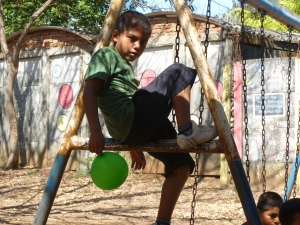 Everyone deserves at least one chance

One year, many chances
I encouraged the children to come to school, to do their homework, to take an interest in learning. Alejandro, 9,  listened intently and followed my advice – 100% attendance. He worked to complete all his homework and at the end of six months he was without doubt the most improved student. I hope he goes on to great things – he has the potential.

I learned to teach children. I’d spend hours thinking about how to motivate the children, how to get the child who was disruptive to work within the group, how to inspire the children to want to learn. At the end of my time at La Nueva Esperanza the school’s Sub-Director said: “Oh, I hope you come back soon.” Another teacher said, “you made a mistake with your career choice, are you sure you’re not a teacher, you’re so innovative and creative with your ideas.” Another teacher said, “What? You’re not a teacher?”I thought you were a teacher.” I think not being a teacher made it easier – I didn’t have a clue what to expect or what I doing, for that matter. But, I had a passion to teach and inspire each and every child I met.

Don’t ask and you will receive
Three friends gave me money to buy things for the children here. In terms of London travel that money would barely buy you two months’ travel but here in Nicaragua it went a long way to making the school experience a little easy for hundreds of children – and teachers, too. With my first donation I bought many items in the UK – not realising how much further those pounds would go over here.

With the rest I bought gifts for the summer school children – pencil cases, erasers, pencil sharpeners etc. It was actually quite hard spending the money! I went to the stationery shop and discovered that bulk-buying in the name of La Esperanza Granada came with a discount. They failed to charge me for the first batch of pencil sharpeners I bought and then when I went back they overcharged me for pencils but curiously the bill was less that the previous purchase so I didn’t complain or demand a refund!

Where Amber, Helen and Magda’s money went:
I had £189 and I purchased:
1 mini globe,
2 footballs – one for the primary school and another for the secondary school,
324 exercise books (language and mathematics),
590 pencils,
100 pencil sharpeners (one stolen within five minutes of arriving in the class!),
208 erasers,
10 rulers,
13 pencil boxes,
72 coloured pencils,
72 coloured crayons,
160 pens (blue, black, red),
8 pairs of scissors,
48 markers (black, blue)
3 pots of glue,
1 bicycle pump (for pumping up footballs)
total: £138.68.
I matched the remaining £50.32 in order to provide every teacher (12) and the three assistants with $10 each. The teachers and assistants work really hard and I didn’t want their efforts to be forgotten.

Thank you, gracias, ta very much
Each and every child and teacher was extremely grateful. Thank you to: Amber, Hetty and Magda. From Nica with love ♥

"Who am I? Why am I here? You're asking, I'm asking. Tired of all the moaning around me, tired of waiting for something to happen, I decided that I couldn't just let life pass me by. It occurred to me that if I could help a single person, that act could change the outcome of an entire community for the better. I want to matter. I want to make a difference. I've chosen Nicaragua." That was 2011 - this is 2018. I'm researching for a Doctorate of Education Creative and Media aka an Ed D. Those early questions are still as important in 2018 as they were in 2011. The Chicassos of 2017 now come with the BlackademicUK tag.
View all posts by lyndacuba →
This entry was posted in education, Nicaragua and tagged charitable giving, charity, creativity, donations, education, La Esperanza Granada, making a difference, Nicaragua, voluntary work, working abroad. Bookmark the permalink.